I’ve just had my most productive crafting week ever – it turns out that (a little obviously!) when I have a few days off work and no internet I can get quite a bit done.  I got a few things finished and a few things started, so I’ll try and show everything over the next few days.

First up is my freebird quilt – pieced and quilted a few weeks ago and finally gifted to my lovely buddy yesterday for her new home.

It’s a really simple crazy log cabin, made from Freebird by Momo for Moda fabrics, with a little Kona Snow as sashing and then some more Moda as backing, along with the leftovers and a little pieced house.  (The green strip along the right-hand side of the backing is because I made a mistake with the measurements and didn’t have enough green backing.  I like it though!)

And I hid a little chicken in it, though it’s a bit hard to spot…

I’m afraid I didn’t take a note of any dimensions, but its a good-sized lap quilt.  The strips were sewn together at wonky angles and then trimmed to 12″ square (I think).  I took ages to decide on the quilting, but in the end went for straight lines following the path of the log cabin, similar to the quilting I did on my Sunshine Cushions last year.  And my buddy seems to like it – happy new home Nikki! 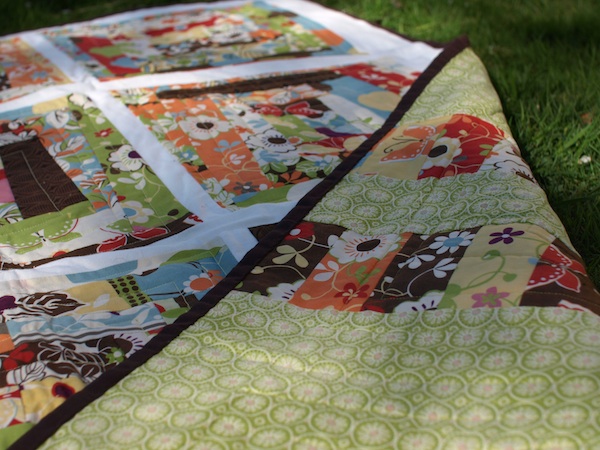 I’ve been panicking a little recently about the size of my Ravelry queue.  I am addicted to organising my queue and genuinely plan to knit everything on it.  Of course the best plan seemed to just knit up all the small and quick things listed to make some space.  And it would have worked, if the new Twist Collective hadn’t been released…

I started with a couple of cushions.

The top is some Noro Silk Garden Chunky, which used to be this sweater (rav link).  I knit it up a few years ago as a sample for the LYS I worked in, and then when it was time to take it home it sat in the back of my wardrobe unloved.  I didn’t really like the design and it didn’t fit, so I ripped it.

This pattern for the top of the cushion is a blanket design, Randig by Orianna Eklund which I worked as written until just 16 increase rows had been completed and bound off.

I pinned the square directly onto a larger piece of backing, sewed it together along three edges with the wrong sides together, stuffed the cushion pad inside, sewed it shut and trimmed.

I don’t think I’ve ever written about the story of this cushion’s backing, I was too ashamed of myself and I’m still not quite over it.  Remember my Idlewood? (Ravelry link)  Well there was a bit of an incident where I’d convinced myself it was superwash, hand-washed it anyway to be careful and then put in the dryer for five minutes to get some of the water out.  My only excuse is that it was the first time I’d ever had a dryer of my own.  Actually, that’s not even an excuse.  I can’t even imagine now how I could think this was an excellent plan.

I feel really sad about it happening to this sweater in particular.  I knit it with yarn that was a present when I left my job in the LYS (which I really enjoyed), it was a joint project as my mum knit the hood.  Part of the body was my sister’s first (and only) piece of knitting.  I wore it constantly as I got ready to move house, and I wore it the day we moved.  And I wore it the day we moved the chickens to their new home, which is why I’d had to wash it in the first place.  Usually I’m not too fussed about what happens to finished objects as I’m more excited by the process, but I feel unusually sad about this.  I think I’ll just have to knit it again.  My buddy Fiona was working on one at my knit night yesterday in some beautiful Manos Wool Classica…hmmmm…..

Anyway!…at least now the sweater isn’t completely wasted.  And my favourite thing about these cushions is that I kept the pockets.

(If you’d like a laugh, have a look at this picture, taken just after The Incident.  And remember that Penny is not a large dog.)

I don’t seem to blog much about my knitting, I figure that since its all on Ravelry I don’t want to be too repetitive.  This newly finished cardigan though is a bit more exciting than normal.  Here is Soay…

This is the new design by my buddy Gudrun Johnston, which I was lucky enough to be asked to test knit.  It’s knit in the very beautiful and oh-i-must-get-more Quince & Co Chickadee, a sportweight American wool.  There are so many gorgeous colours in this yarn but since I have no blue sweaters (and I am in my blue phase still) I went for the Bird’s Egg colourway.

It’s knit from the bottom up, backwards and forward to the armholes, then the front left and right, and back are worked separately and seamed at the shoulders.  Stitches round the sleeves are then picked up and knit down seamlessly with short rows to shape the sleeve cap.  I just love this kind of construction – it’s not too complex but there is always something interesting going on.

From the minute I started this I worked on nothing else, it came everywhere with me for just four days until it was finished.  I knit it in the car, in a restaurant, in cafes, and while chatting with family and cuddling Penny.

It’s lightweight but warm, spring-like and happy, and I think I’ve worn it every day since I finished.  Turns out I have a lot of blue, teal and grey dresses that never had knitwear to match! 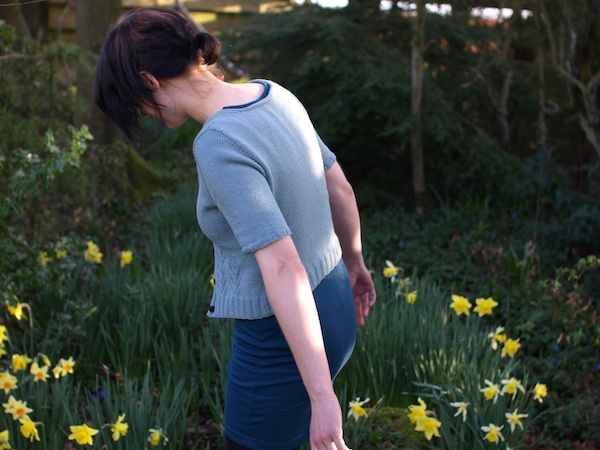 And the pattern is now available for all!  I am seriously considering making another one in handspun grey wool (maybe with some alpaca?) with long sleeves.  Hmmm….

My sewing time seems to be almost completely taken up with patchwork and quilting thes days, but I’ve decided to be brave and try again with a little dressmaking.

I had such fun making Macaron last summer so I’ve gone for another Colette pattern, Rooibos.  When Penny and I were up north last month I picked up some lovely soft pale blue wool, and a little of a cotton print that it turns out is almost identical to the fabric used to make my mum’s knitting basket.  (My mum just started using her basket again recently, but I remember it always being beside her chair when I was very small.)

I’ve been working away at this very slowly, and really enjoying it.  Just like last time the directions are nicely written and fairly straighforward.  For me, this dress seems easier to make than Macaron, and I love the way the facings are attached round the armholes, it’s genius!  (And maybe completely normal to experienced dressmakers but I was pretty impressed…)

Yesterday I finished up the bodice.

The fit is good so far, I might take in the back a little by increasing the height of the darts but apart from that I’m happy.  Tomorrow….pockets!

I ended up doing some very rushed late-night stitching last week after realising that Mother’s Day was only three days away, and getting a present to my mum means posting it.  Hmmm.

I’ve been getting really inspired by Completely Cauchy’s blog recently, and especially this fantastic mini-quilt in black and white.  There was a pile of red and aqua fabric sitting on my cutting mat and I figured I’d make a couple of pot holders.  I made my mum the same thing last year (I think it was actually the very first thing I stitched on my lovely new Bernina, I certainly remember it was the first time I’d tried the walking foot!).  She seemed to like them, and use them, and she likes crazy colour combinations.  And so…

The aqua is Kona Cotton in Azure, and the red is various scraps, some Moda and some that I picked up at Rebecca Ringquist‘s stall at Squam last June.  For the back I used some Liberty cotton* that I picked up at the V&A Museum in London after seeing their Quilt exhibition. 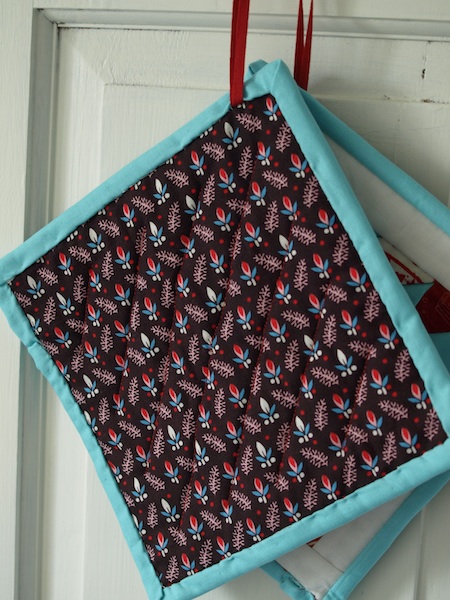 As usual there are several dodgy bits – this whole project was a bit rushed and I stitched down most the binding at my knit night.  And I really wanted to eat some cake.  But it didn’t get done though and had to take my chocolate brownie home…  My mum seems to like them though which I guess is the main thing!

*Oh man.  I just clicked that link to check and all the fabric is on sale.  Now I am planning dress pattern/fabric combinations…

I felt it coming on a while ago, and now I am firmly in a Very Blue Phase.  This time it’s spilled over into all my crafting, not just the knitting as normal.  It’s not a problem so far, I have lots of blue yarn and fabric and when I’m bored of it I’ll move onto something else.  (I suspect grey.)

Right now I’ve been knitting lots of swatches, more swatches than I have ever knit for a project before.  I’m almost settled, just one more to try…

I dream about one of the next sweaters I’m going to make.  Finishing up the pale blue shetland fibre on my wheel will mean I can start to swatch the colourwork for the yoke, below is the rest of my handspun, waiting… 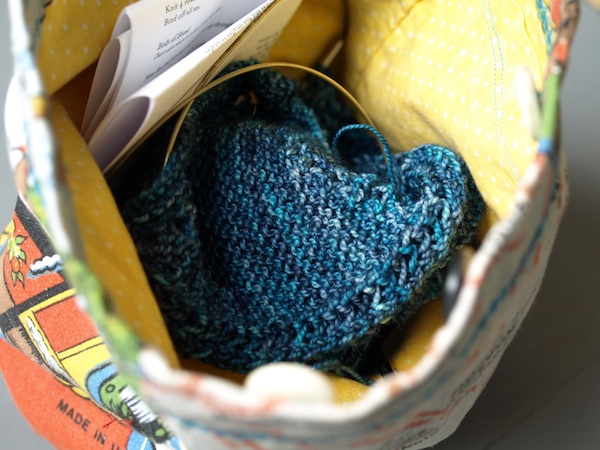 And the Blue Phase as almost completely taken over my sewing too.  This is the back of a quick project from this week, the front has a lot more blue but I’ll wait to show it properly until, um, Mother’s Day has passed on Sunday.

As I type this I’m realising that this isn’t even the full extent of the Blue Phase.  There is blue wool fabric for a blue dress next week, and a recently completed blue sweater to be photographed at the weekend…

Error: Twitter did not respond. Please wait a few minutes and refresh this page.